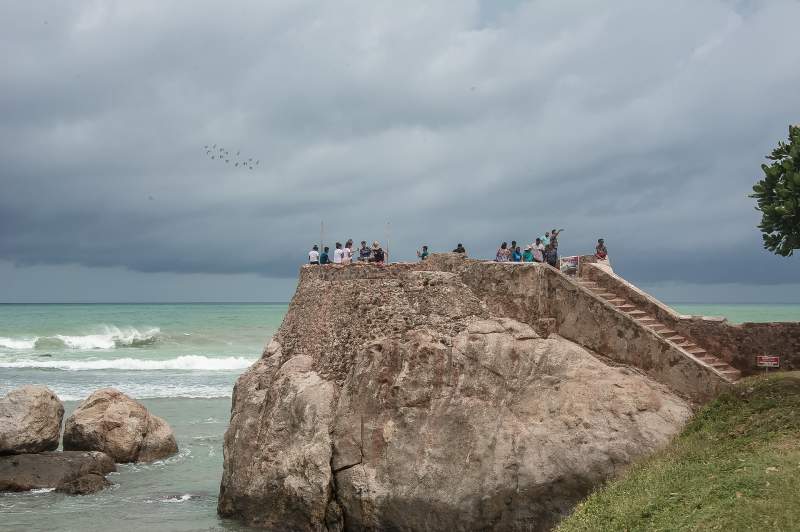 You will be welcomed by our representative and handed over to your respective guide, Proceed to Sigiriya. Dambulla Cave Temple was first used as a refuge for King Valagambahu in 1st century BC. Concealed by the local monks while returning from exile to his throne at Anuradhapura, he had the magnificent cave temple built for them. The cave temple consists of a complex of Buddhist image houses. Its rock ceiling is one large sweep of colorful frescoes, some of which dates back to over 2,000 years, which depicts Buddhist mythology, and the tales of the Buddha's previous births. This cave temple has the largest number of Buddha statues all housed in one place, including a 14 meter long, colossal figure of the recumbent Buddha carved out of the rock.

(Optional US$ 30 per person) Sigiriya Rock Fortress is home to the 5th Century Fortress in the Sky which is perhaps the most fantastic single wonder of the Island. It is also known as Lion Rock because of the huge lion that used to stand at the entrance to the fortress. Within its triple- moated defense the huge rock rises almost to a sheer height of 500ft. On its summit are the foundations of what was once a great and sumptuous palace and gardens complete with swimming pool. On one of the stairways the only known ancient work of Sinhala secular painting survived in the form of Frescoes of life sized damsels in all the freshness and delicacy of their original color. Overnight stay at Sigiriya

After breakfast proceed to Kandy. Visit Spice Garden in Matale to see the different spices, which Sri Lanka is famous for. You will be introduced to different spices and shown how some of these spices are grown and processed. Visit Kandy, including Upper Lake Drive, Market Square, Arts & Crafts Centre, Gem Museum & Temple of Tooth Relic. Kandy the hill capital, venue of the annual Perahera. Kandy was the last stronghold of the Sinhala Kings, which was finally ceded to the British in 1815. Kandy is an example of the Buddhism's influence in Sri Lanka today. Temple's shrines and monasteries keeping alive Buddhist traditions are everywhere. Temple of the Sacred Tooth Relic - ever since 4th Century A.D, when the Buddha's Tooth was brought to Sri Lanka hidden from sacrilegious hands in an Orissan princess' hair, the Relic has grown in repute and holiness in Sri Lanka and throughout the Buddhist world. It is considered Sri Lanka's most prized possession. By the night experience a colorful show where you will be taken to mind blowing Sri Lankan culture extravaganza Get ready for Heavy drumbeat and acrobatic act. Overnight stay at Kandy.

After breakfast proceed to Nuwara Eliya. Enjoy Tea experience, which involves a visit a plantation to observe firsthand the process, starting from the plucking field where it all begins with the picking of two leaves and a bud to the factory where the processing begins. Originally introduced to the island around 1850 by the British, Ceylon Tea is world famous for its high quality and has remained a major contributor to the islands economy for generations. Currently, Sri Lanka is one of largest exporter of tea worldwide. The high altitudes produce the best flavors, so Sri Lankas hill-country is the ideal environment to grow the most flavorsome tea. A guided tour around a Tea Factory is an enlightening experience.

Nuwara Eliya The Little England of Sri Lanka, is set against beautiful backdrops of Mountains, Valleys, Waterfalls and Tea Plantations. It is supposed to be one of the coolest places in the Island, but it is really just like an English spring day, although the temperature does drop at night. All around Nuwara Eliya you will see evidence of the British influence, houses like country cottages or Queen Ann style mansions. The Victoria Park, in the middle of the town, is a lovely place for a stroll or a picnic and is also good for Birding as you get some rare birds in this Park. Seasons may be absent elsewhere in Sri Lanka, but here you can read them by the flowers. Dinner & Overnight stay at Nuwara Eliya.

After breakfast proceed to Yala. Yala, situated in the south east corner of the island, is home to the greatest variety of Sri Lankas wildlife. Its varying habitats, consisting of scrub plains, jungles, rocky outcrops, fresh water lakes, rivers and beaches, provides home to many species of animals including sloth bear, herds of elephants, buffalo, monkeys, sambar, deer, crocodiles and the endangered leopard subspecies, Panthera Pardus Kotiya, which is only found in Sri Lanka.
At dusk, visit the Yala National Park with a total protected area of 126,768 hectares, Yala consists of scrub plains, lagoons and rocky sections and offers the broadest cross-section of the countrys flora and fauna. In terms of game-viewing this is probably the best place to see all of the big three: elephant, leopard and water buffalo. It is estimated that Yala is home to about 35 Leopard making it one of the world's densest leopard populations. Countless other animals including sloth bear, deer, wild boar, crocodiles, monkeys and numerous species of birds can also be seen. Dinner & Overnight stay at Yala.

After breakfast proceed to Galle world heritage site. Marine Turtle Conservation in Kosgoda... Globally, all seven species of marine turtles are endangered. Of these seven, five come ashore to nest in Sri Lanka. The process of marine turtles nesting, hatchlings being born, and swimming back to sea is fascinating to observe. The Kosgoda Conservation Project is an ideal way to learn and observe this endangered species. Garden Beach Hotel, on the edge of Turtle Beach, offers responsible night-time expeditions to its guests if turtles are lying. Galle Fort, a UNESCO World Heritage Site, originally built by the Portuguese and then further developed by the Dutch and the British, covers nearly four sq kms, and is protected by 12 bastions and connecting ramparts. During the early 18th century the Old Dutch Gate was the entrance point to the Fort. Subsequently the British built the Main Gate which is still used today. Buildings of interest include the Dutch Reformed Church, All Saints Church, Amangalla Hotel (formerly the New Oriental Hotel), and the lighthouse and bell tower. The Dutch also developed what was then an innovative tide-based sewage-system within the Fort. A maze of narrow roads lined with small houses and shops with Dutch names still remain. Overnight stay at Galle.

After breakfast proceed to Colombo. Go for a drive through the city taking you to the busy commercial areas as well as the tree lined residential, Cinnamon Gardens. Visit Fort, the former British administrative center and military garrison, Sea Street - the Goldsmiths quarters in the heart of Pettah, the Bazaar area, where there is a Hindu Temple with elaborate stone carvings, and the Dutch Church of Wolfendhal dating back to 1749. Visit the BMICH, see the replica of Avukana Buddha & the Independence Square.
From buzzing bazaars to stylish boutique outlets, Colombo is increasingly becoming a popular shopping destination within Asia. Odel is Sri Lankas most famous shop, a growing department store in the centre of town. Western-label clothes are sold at a fraction of overseas prices. Other attractions include home wear stores like Paradise Road, Suriya and Gandhara. Saffron Villas is popular for antique furniture. Barefoot is famous for its hand spun and vibrantly-coloured fabrics. There are several good quality jewelers. If you want to get a feel for the trading heart of the city, spend a hectic morning wandering the narrow streets of Pettah Bazaar where you will find anything from steel pots to the latest mobile phones. Overnight stay at Colombo.

After breakfast transferred to the Airport for the flight back.