You will arrive at Amman airport and will be met by our representative at the airport; you will transfer to your hotel on the Dead Sea for overnight.

Free morning at the Dead Sea for a swim in the salty waters of this lowest spot on earth. Experience the ultimate sensation of trying to swim, while you can actually only float. Then proceed to visit Madaba, known as the City of Mosaics. Here you will visit the oldest map of the Holy Land on the floor of Saint George’s Church. Madaba, or Medeba in antiquity, features many famous mosaics that exist in public and private buildings. After Madaba, a short drive will bring you to Mt. Nebo, the alleged burial site of Moses overlooking the Jordan Valley and the Dead Sea. From this mountain top Mosaic had his first glimpse of the Holy Land, a land he was never allowed to enter. Here Franciscans have built a structure that protects a 4th and 6th Century Byzantine church.
Then stop for a while for lunch at Haret Jdoudna Restaurant is a very elegant restaurant in the centre of downtown Madaba with a beautiful courtyard garden where you can sit under big umbrellas. The restaurant is nestled in a small shopping area so you can even do a little handicrafts shopping while you wait for your food. Probably Jordan’ best traditional restaurant Large choice of cold and hot dishes, you are sure to find something you like but worth a try is the grilled chicken or labneh served with fresh herbs. Why not try a Hubbly Bubbly water pipe in Apple, Mint or Strawberry flavored tobacco. They also have those flavored water pipes to smoke if you feel like giving it a try. Head back to your hotel for a free late afternoon float in the salty waters of the Dead Sea as you enjoy the sun setting over the mountains of Israel. Overnight Dead Sea.

After the breakfast, proceed to the North of Amman for a 45 minute drive to the best preserved example of Roman civilization, the city of Jerash. Jerash, part of the Decapolis (the ten big Roman cities of the East) has been called the Pompeii of the East for its unique state of preservation. The city features theaters, churches, temples (Zeus and Artemis), a Nymphaeum and colonnaded streets. After the visit back to Amman to start a city tour of Amman, the capital of the Hashemite Kingdom. Often referred to as the “White City” because of the white stone used to build houses, Amman offers a contrast between oriental and cosmopolitan. The tour will take you to the museums, the Citadel, the amphitheatre, the souks and the modern part of town. Back to your hotel at Dead Sea for overnight.

After breakfast, depart Dead Sea on a full day tour of Petra. Once the ancient Nabatean capital, this city gently reveals itself as you walk through its hand carved facades. Starting at the visitors center, each person is assigned a horse guided by a local Budouin who will lead you to the once hidden entrance to the lost city. After passing some tombs which are located outside the city, the visitor passes through the SIQ, an immense crack in the Nubian sandstone. It is a winding, one-kilometer-long fissure between overhanging cliffs that seem to meet more than 300 feet overhead. Near the end of the passage, the SIQ, with great style, makes one last turn and out of the gloom in towering brightness appears Petra’s most impressive monument, el Khazneh - The Treasury. This is one of the most elegant remains of antiquity, carved out of the solid rock from the side of the mountain and is nearly 140 feet high and 90 feet wide. 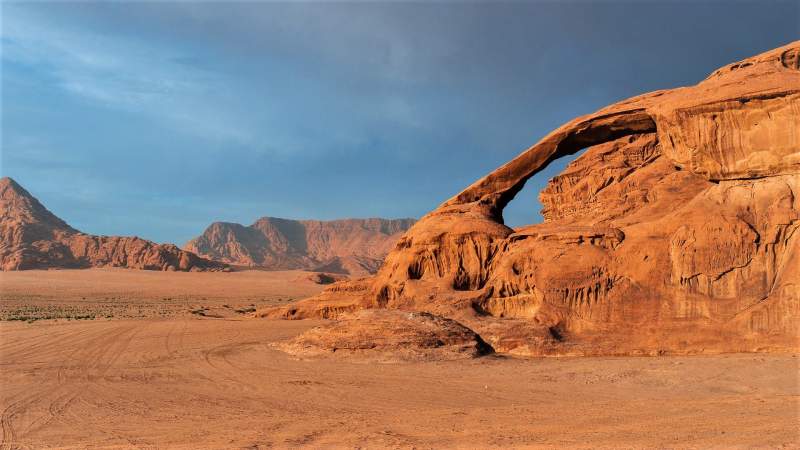 Beyond el Khazneh the visitor is surrounded on both sides by hundreds of Petra’s carved and built structures, soaring temples, elaborate royal tombs, a carved Roman theater, large and small houses, burial chambers and much more. The Victorian traveler and poet, Dean Burgon, gave Petra a description which holds to this day - “Match me such a marvel save in Eastern clime, a rose-red city half as old as time.”

You will then transfer to the magical desert of Wadi Rum, home of “Lawrence of Arabia”. Upon arrival, you will take a jeep tour managed and driven by one of the local Bedouin to many of the sites in the moon-like landscaped desert. You will start from the visitor center and drive to Rum village about a 10 minute drive on paved roads. After this you will head into the ochre coloured sandy desert as you visit the sites of Rum. Visit Lawrence’s spring this spring was named for T.E. Lawrence, of Lawrence of Arabia fame, who fought in the Arab revolt against the Ottoman Empire. Continue to Khazali Canyon an iconic feature in Wadi Rum, Khazali Canyon is an easy 20 minute walk that allows you to see many Nabatean inscriptions and drawings. Following a visit to Rum’s majestic sand dunes, you will head directly to the Discovery Bedu Eco - Friendly Luxury Camp with its unsurpassed sun set viewing opportunity. Uniquely tailored to perfectly blend with the natural surroundings, the camp offers you an authentic experience in the heart of this truly spectacular place without compromising on your comfort. Located at a particularly scenic viewpoint in Wadi Rum, the bespoke camp is run by local Bedouins and is the flagship for more luxury camps in Jordan. There are six tented suites all with en-suite bathrooms and supplied with hot and cold running water and electricity all solar powered.
Upon arrival, guests are escorted to the central tent which serves as a lobby and a dinner venue
This tent is handmade by the Bedouins from the hair of their goats, it is black in colour with some colourful weavings in places. They are made durable for the Bedouins to protect them from cold winters and hot summers. The tent is fully furnished with comfortable low Bedouin style seating on a wooden surface. This central Bedouin tent is also used as the main dining area as well as evening gatherings. Enjoy an evening around the camp fire in the Star Lounge on one of the luxury sofas enjoying the desert night sky, looking out for constellations, shooting stars and the Milky Way. Wake up in the serenity of the desert and enjoy breakfast on the rocks with undisturbed views of Wadi Rum stretching for hundreds of miles.

You will transfer to Amman airport to fly back home.