The Young Ones Full Itinerary for Jordan 8 Days 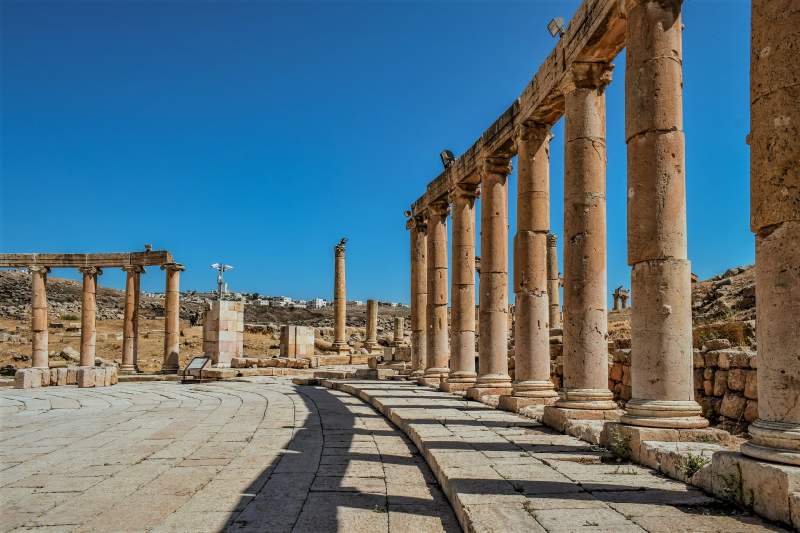 You will arrive at Amman airport and will be met by our representative at the airport, you will transfer to your hotel in Amman for overnight.

After breakfast, start a city tour of Amman, the capital of the Hashemite Kingdom. Often referred to as the “White City” because of the white stone used to build houses, Amman offers a contrast between oriental and cosmopolitan. The tour will take you to the museums, the Citadel, the amphitheatre, the souks and the modern part of town. Then Proceed to the North of Amman for a 45 minute drive to the best preserved example of Roman civilization, the city of Jerash. Jerash, part of the Decapolis (the ten big Roman cities of the East) has been called the Pompeii of the East for its unique state of preservation. The city features theatres, churches, temples (Zeus and Artemis), a Nymphaeum and colonnaded streets. After the visit, proceed to the Saracen castle at Ajloun. This 12th Century castle was built by Saladin in his successful campaign to drive the Crusaders from Jordan in 1189 and is an outstanding example of Arab/Islamic military architecture. In the late afternoon, return to Ajloun Cabins for overnight.
Set amongst dense highland forest of evergreen oak, olive, pistachio, carob and wild strawberry the Ajloun Nature Reserve is a perfect overnight location for families. With, both guided and self- guided walks you can try the easy Soap-Makers’ Trail, which leads from woodland cabin and tents where you stay overnight to the Soap House, a crafts project employing local women and where you can buy hand-made soap.

You will depart Ajloun and head to Madaba, known as the City of Mosaics. Here you will visit the oldest map of the Holy Land on the floor of Saint George’s Church. Madaba, or Medeba in antiquity, features many famous mosaics that exist in public and private buildings.
After Madaba, a short drive will bring you to Mt. Nebo, the alleged burial site of Moses overlooking the Jordan Valley and the Dead Sea. From this mountain top Mosaic had his first glimpse of the Holy Land, a land he was never allowed to enter. Here Franciscans have built a structure that protects a 4th and 6th Century Byzantine church. You will then transfer to Rummana Camp for overnight.
Set in the flagship reserve of the Royal Society for the Conservation of Nature, the Rummana campsite is one of three accommodation option in the reserve. The Rummana campsite is perfect for families and the white canvas Bell tents are equipped with mattresses and blankets. The campsite enjoys spectacular views and opportunities for guided, and self – guided walks including the three hour trail to the Dana Guest house, an easy walk with no rises or falls in terrain.

After breakfast, depart on a full day tour of Petra. Once the ancient Nabatean capital, this city gently reveals itself as you walk through its hand carved facades. Starting at the visitors center, each person is assigned a horse guided by a local Bedouin who will lead you to the once hidden entrance to the lost city. After passing some tombs which are located outside the city, the visitor passes through the SIQ, an immense crack in the Nubian sandstone.

It is a winding, one-kilometre-long fissure between overhanging cliffs that seem to meet more than 300 feet overhead. Near the end of the passage, the SIQ, with great style, makes one last turn and out of the gloom in towering brightness appears Petra’s most impressive monument, el Khazneh - The Treasury. This is one of the most elegant remains of antiquity, carved out of the solid rock from the side of the mountain and is nearly 140 feet high and 90 feet wide. Beyond el Khazneh the visitor is surrounded on both sides by hundreds of Petra’s carved and built structures, soaring temples, elaborate royal tombs, a carved Roman theatre, large and small houses, burial chambers and much more. The Victorian traveler and poet, Dean Burgon, gave Petra a description which holds to this day - “Match me such a marvel save in Eastern clime, a rose-red city half as old as time.” After a full day in Petra head back through the entrance to your hotel for overnight.

Breakfast at the hotel and free time in Petra, then transfer to the magical desert of Wadi Rum, home of “Lawrence of Arabia”. Upon arrival, you will take a jeep tour managed and driven by one of the local Bedouin to many of the sites in the moon-like landscaped desert. You will start from the visitor center and drive around 10 min to get to Wadi Rum village, then visit Lawrence spring this spring was named for T.E. Lawrence, of Lawrence of Arabia fame, who fought in the Arab revolt against the Ottoman Empire. Continue to Khazali Canyon an iconic feature in Wadi Rum, Khazali Canyon is an easy 20 minute walk that allows you to see many Nabatean inscriptions and drawings. Finally visit the Sand dunes, and then head back to the camp in Wadi Rum for overnight.
As the sun sets in Wadi Rum you will experience not only the changing temperature but also the changes in the colour of the rock as and sand take on the deep red of the setting sun. As day turns to night the atmosphere of the desert changes from one of oppressive (heat) to relaxed and welcoming as the Bedouin prepare the fire and the sumptuous hospitality. Once the night a fully arrived the stars will come into their own as they light up the night sky. In clear morning light of sunrise the desert takes on a heavenly aura before the sun once again assumes control.

In the early morning you will depart Wadi Rum and head to the Jordanian coastal city of Aqaba, Jordan’s gateway to the Red Sea. Aqaba is one of the major tourist attractions in Jordan, and famous for its warm water and rich marine life. It is best known today as a seaside and diving / snorkelling resort. Aqaba’s vibrant fringe reef and crystal clear waters make it the perfect spot for snorkelling and for those who prefer to experience the coral from the comfort of a glass Being Jordan’s only port city, Aqaba also has a thriving souk and an abundance of local and tourist restaurants. bottom boat. Transfer to your hotel in Aqaba for overnight

After breakfast at your hotel, you will proceed along the Dead Sea Highway, for the beautiful drive through the Wadi Araba desert and passing the banks of the Dead Sea. As you descend to 410 metres below sea level you will notice the change in both temperature and landscape. The Dead Sea Panoramic Complex/Dead Sea Museum is a new complex of regional museums about the Dead Sea region, history and geology. The museum is run by the Royal Society for the Conservation of Nature, and has some fascinating information about the geology, ecology (animal and plant), archaeology, history and industry of the Dead Sea and surrounding area. It has also information about the environmental problem concerning the Dead Sea, such as decreasing of the Dead Sea water level and sinkhole in the Dead Sea coast. As the name suggests it has a magnificent view of the Dead Sea and the hills beyond it. Watching the sunset from here is a wonderful experience. And then transfer to Mujeb Chalets for overnight.
Operated by the Royals Society for the Conservation of Nature the Chalets are built on to the Madash Peninsula and offer the only view of the Dead Sea with both an East / West and North / South perspective. Each of the 15 chalets has an uninterrupted sea view with a shaded terrace. Access to the Dead Sea and the fresh water showers is for private use of those staying in the chalets.

You will transfer to Amman airport to fly back home.