Depart Mumbai by ET611 (04hr00) & arrive by ET847 (13hr45) in Cape Town International Airport. You are met by Travcare representative for a transfer to your pre-booked hotel. Cape Town is one of the most popular long-haul destinations in the world. Due to its unique topography, it is also one of the easiest places in which to orientate oneself as long as you remember that with Table Mountain behind you and Robben Island before you; you are facing north, looking across Table Bay and up the west coast of Africa. Afternoon we will visit V&A Waterfront for relaxed Orientation tour. Later you can choose a Sun-downer Cruise for a great Sun-set with local champagne or view the fantastic City-scape & glittering harbour from the Cape Giant Wheel (on own account).

After breakfast leave on a half-day Mother City tour & Seal Island cruise at the Hout Bay. You will go for a scenic coastal drive through Clifton & Sea Point & later tour passes the Houses of Parliament, the Castle, the SA Museum, and a few other historical sights – District Six, Bo-Kaap, Slave Lodge & ending at the bustling Greenmarket Square. A cable car ride, takes you up the Table Mountain (weather permitting otherwise Signal Hill) for a breath-taking view over the city (entrance is included) In the afternoon visit Greenmarket square for Souvenir shopping.

Breakfast is taken at the hotel. Depart on a full day Peninsula tour. This comprehensive tour shows you the best of the spectacular Cape Peninsula and why it is it's called the Fairest Cape. Travel past Sea Point and Camps Bay, past the famous beaches of Clifton and Llandudno. Drive along the Atlantic Seaboard. Pass through Noordhoek and Scarborough. Later you will take to the Cape of Good Hope Nature Reserve. Enjoy the funicular ride aboard the “Flying Dutchman” and enjoy the unforgettable spectacular views. Later get the photo opportunity to take some pictures at the second southern-most tip of the African continent. Visit the beautiful Boulders Beach and have the option to sit among the famous colony of Jackass Penguins. Thereafter we enjoy a short stop at the naval port of Simon's Town and know about the legend of “Able Seaman Just Nuisance” the Great Dane Dog that was inducted in Royal Navy. Return to the hotel.

Breakfast is taken at the hotel. Today we can enjoy – Quad biking, Paragliding, Hot Air Ballooning etc. All of these activities must be booked in advance.

After early breakfast, we depart on Garden route to Knysna via Mossel Bay. In Mossel Bay you will enjoy breathtakingly stunning views of the Atlantic Ocean & the town of Mossel Bay in a Helicopter Ride or Sky-Diving for a life-time remembrance of adrenalin rush. Later transfer to Knysna and check in at the great setting of your hotel.

After breakfast depart for Tsitsikamma National Park to see Suspension Bridge spanning 77 meters on the mouth of Storms River just 7 meters above the churning waters. Thereafter visit Bloukrans River Bridge for just a Walk or highest commercial Bungee jump in the World (extra cost). Some of you may want to do World famous Canopy tours. Return to Knysna in the afternoon. 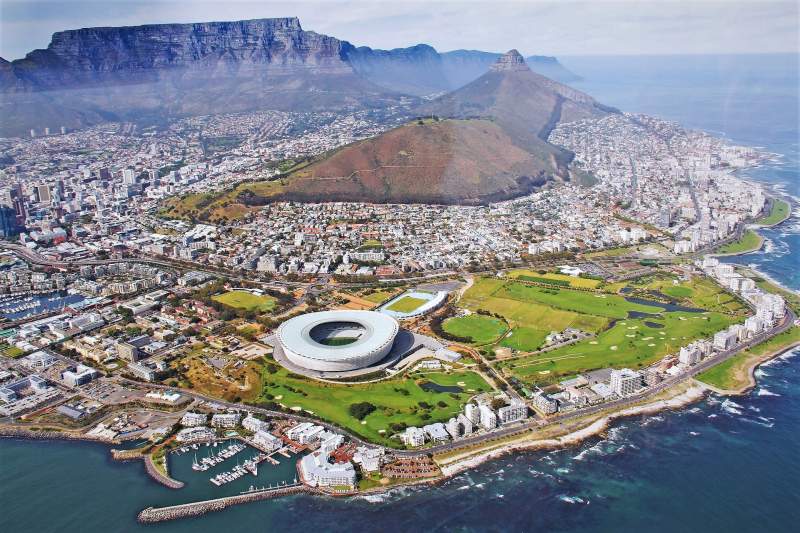 After breakfast you depart for Oudtshoorn. It is known as the ‘Feather Capital of the World’ due to its world famous Ostrich industry. Visit a working Ostrich farm to know of the history & farming practices. You will watch the ostrich eggs, incubators & chicks (in season) of this magnificent animal. You will love the unique gifts or an Ostrich Egg souvenir.We will visit Cango Valley home to Cango Caves in Limestone ridge parallel to Swartberg Mountains. Here you go underground to marvel at the icy formations in Dripstone caverns, regarded as one of South Africa’s most spectacular natural wonders. Visit the famous Wild-life Ranch to see giant Crocodiles & other predators. You have an opportunity to take pictures with Cheetah (at a cost). Return to Knysna at the Waterfront for more Souvenir shopping or photo-ops with the picturesque Knysna Lagoon in the background.

After breakfast you transfer to George airport for a flight to Johannesburg. Arrive and transfer to Mabula Game Lodge. Arrive and check in at the Lodge and depart for an afternoon game drive (both Lunch and Game Drive are scheduled/time permitting.

After Breakfast transfer to Sun City. Arrive and check in (check in time is 1400 hrs)The Sun City complex is surrounded by two championship golf courses, numerous swimming pools and a huge man-made lake offering various water sports. Optional activities include Hot Air Ballooning. Then you could relax at the Valley of the Waves, or take a walk through the gardens of the Lost City. This magical city knows no limits - you have the chance to win a fortune at the Casino and Entertainment Centre, there are lavish extravaganzas and a multitude of restaurants to cater for every taste.

After breakfast, you will enjoy your day at leisure to explore Sun City on your own and enjoy free time at the Valley of Waves.

After breakfast, transfer to OR Tambo International Airport.